Slangs can be a little hard for parents to understand, especially those who have stayed away from mobile phones. This might create a communication barrier between parents and their children and, more dangerously, make parents miss potentially harmful texts that teenagers exchange nowadays. To solve this problem, most parents go online to search terms such as ‘wank meaning’ or ‘jerk off meaning’ to understand these slangs.

Well, worry not, as we got all of them covered right here along with their proper descriptions.

These are some of the most discourteous and sexual slangs teenagers use while texting across all social media platforms:

DIY - Do it Yourself

DIY is one of the few slang on this list that can be used in both a positive and a negative manner, so before judging your child on using this abbreviation, be sure to see the context in which it is being used.

To play with oneself once again means the act of self-pleasure and also refers to the members of both sexes. Playing with oneself is similar to the phrase ‘touch yourself’ and is also not slang. However, parents should keep track of how this phrase is used to make sure teenagers are not using it in inappropriate contexts.

So the next time you hear the phrase ‘beat the meat’ or ‘wank’, you’ll have a good idea of what it means and can step just in time to give your child a bit of sex education.

Be Aware of Teen Drug Slangs!

Part 2: How to Talk about Sex Education with Teens and Why it’s Important?

Talking about sex for the first time with your children can be hard enough. Still, children of today’s time need a descriptive approach to sex and need to be taught about the proper necessities. These necessities include safer sex, pregnancy prevention, and knowledge about sexually transmitted diseases.

Apart from parents, schools also play an important role in educating teenagers and should act as an important source of education for the youth of our time.

So here are the reasons why it’s not only important but a necessity to teach your children about safer sex, saving them from future complications that can possibly ruin their life.

Safer Options should be Taught

Most teenagers don’t have the correct information about safer sex, leading to complicated problems such as STIs and unwanted pregnancies. These problems can be easily solved by teaching children safer sex methods both in educational institutes and by their own parents.

Talking with your children about sex will not make them want it more. On the other hand, when they will learn about the problems with unsafe sex and the complications that follow, they will most likely try to avoid having sex under certain conditions. There are studies supporting this fact where the teenagers were given condoms for protection, but that did not correlate to an overall more sex percentage.

Showing Boys to take care of Themselves

Teaching boys about sex education and the benefits of preventive care will help them avoid many diseases in their life. When the boys get their next monthly checkup, they will most likely opt for diseases to be screened for, including STIs.

Moreover, this will lead to boys discovering certain illnesses early on, making them easier to tackle. It will also help reduce the toxic masculinity trait that boys are harder so are less likely to suffer from diseases, leading to boys getting lesser checkups.

If a parent wishes to teach their children family values such as saving sex till marriage, then it can be done when talking about sex education.

When children know how sex works, they are more likely to understand the restrictions (if any), and they effectively prevent the damage that could come from unsafe sex. Moreover, if children were not given sex ed at all, these types of family value-based messages would never get across.

The More Children are Taught about Sex, The Better

Those who want to engage in sex will engage in sex regardless of how much they are stopped. Knowing about safer practices will help them practice safer sex, as having safer sex is better than having an unwanted pregnancy or an STI.

Another problem with STIs is that some of the teenagers might try to hide their STIs from their grownups to avoid moral judgment. This is dangerous, and if the STI is a serious one, it can even take the life of a child. If the child knows what the implications of an STI through sexual education are, they will tell their parents regardless of any moral judgments, leading to a faster cure.

Part 3: How to Monitor Dangerous Text and Pictures on Kids’ Phones? 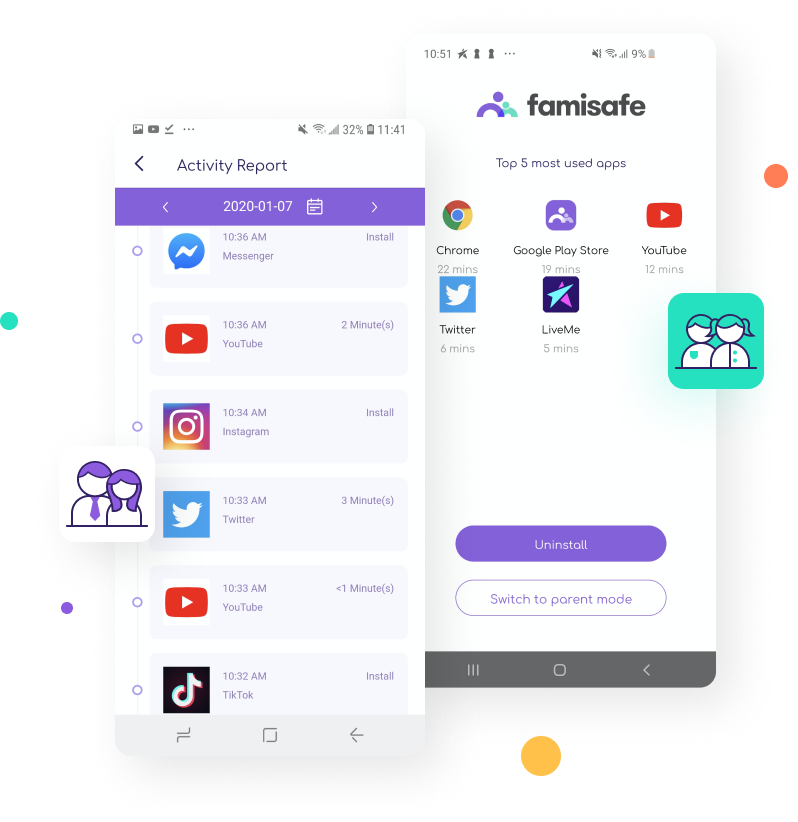 The internet could be a potential hunting ground for predators to harm or cyberbully children online. Still, it’s almost impossible to stop your children from accessing the internet in today’s age and time. Moreover, stopping them from going online will also steal away from them a limitless source of valuable information.

So the solution is not taking away the internet, but monitoring it, allowing children to acquire the relevant knowledge while staying away from the dangerous stuff online.

To make monitoring possible without invading the privacy of your children, you can use a third-party parental control service such as Wondershare FamiSafe, as it alerts parents whenever their child comes across an inappropriate image. Parents can also set the accuracy of the filter, allowing for stricter or lighter monitoring.

This is important as parents need to know if a minor is looking at inappropriate images or sexual content and intervening in time to stop their child from problems related to sexual addiction. Parents can open the FamiSafe app and navigate to the list of features.

There, they can pick the option of ‘suspicious photos’ and enable it. Next, they have to choose the level of accuracy. Once all is set and done, alerts will be sent in the form of notifications whenever the child comes across an inappropriate image or text on their device.

It’s important to know all the sexual slang being used online, as this will help parents intervene if their child is coming across content that can be damaging. Teenagers use several of these slang to engage in dangerous activities, and unless parents don’t know the relevant slangs and phrases being used, they can never help their children.

Apart from learning the relevant sexual slang, parents should also teach their children proper sex education, so when they do engage in sex, they do it safely. Knowing safe sex measures will help teenagers avoid unwanted pregnancies or STIs, both of which can wreak havoc on a teenager’s life.