4 Methods to Play Minecraft on Chromebook

Tried and Trusted ways, must be one for you.

“How to play Minecraft: Education Edition on my Chromebook. I had heard that Minecraft isn’t compatible with Chromebooks, but I have seen some play access the game. What is the best method to access Chrome Minecraft?” 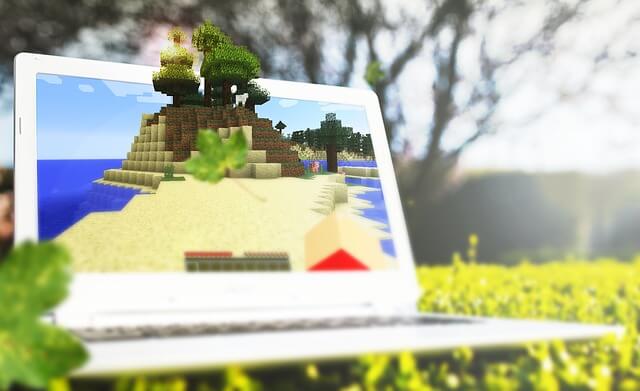 Currently, there is no better game than Minecraft for learning purposes. Besides, you can use it to interact with new people. Previously, the game didn’t support the Chrome OS.

However, now it is not the case, as Chrome OS supports Android-based services. Hence, we work out many solutions for you to play hot games in Chromebook. You may like: How to Play Roblox on a Chromebook? Tried and Trust solution 2021, or 3 Ways to Play Fortnite on a Chromebook.

To run the Minecraft Java version on your Chromebook, you need to install Linux on the device. You can install Linux on your ARM-based Chromebook, so no worries of Developer mode is required. The first step to installing the Minecraft Java version is to check whether the device has Linux beta. Without the JAVA edition, it would be impossible to run the game.

Step1Turn on Linux on your Chromebook:

1. On the bottom right corner of the Chromebook display, select the Time tab.

2. From there, choose Settings and access the Advanced option. 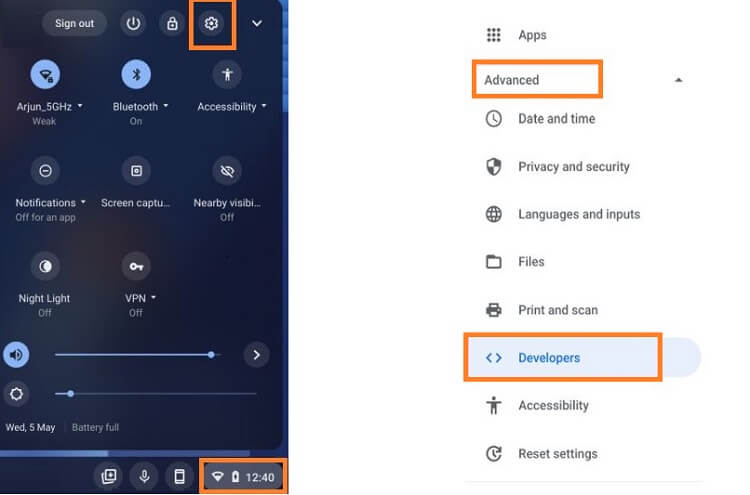 3. Next, open Developers, and Turn on the Linux development environment tab.

4. After that, follow the on-screen instructions, as the device will set up the new OS. It will take roughly 10 minutes for the process to finish.

5. As soon as the installation is complete, you will see a new terminal window. From there, you can efficiently run Linux commands under the Debian 10 (Buster) environment.

6. Using the terminal window, run the following command to update the Linux to the latest build.

Once the Linux is set up on your Chromebook, the next step is to enable the Minecraft Java version on the device. For that, you need to follow the step-by-step guide mentioned below:

1. Head over to the official site of Minecraft, and download the Debian/Ubuntu or Minecraft.deb version on the device.

2. Next, open the File Manager, access My Files, and move the downloaded Minecraft file to the Linux Files folder. 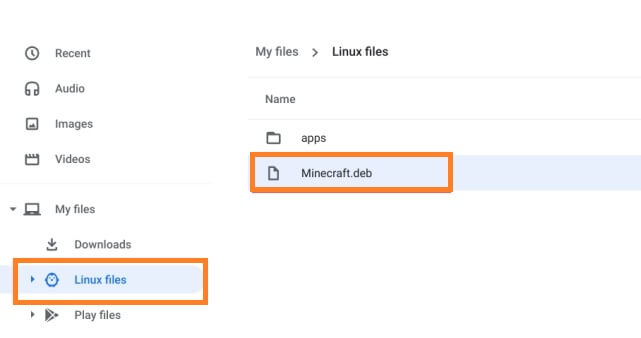 3. From there, double-click the file, and you will see a new dialogue box. Click on Install to finally add Minecraft to your Chromebook. 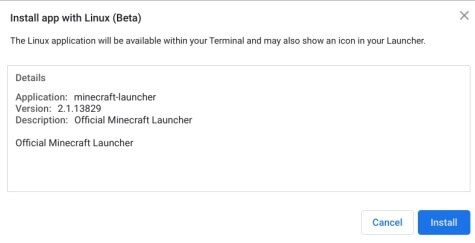 4. Next, press the Search button from the Chromebook keyboard, and type Minecraft into the search bar. You will see the Minecraft Launcher option from the list. Simply click on the icon to run it. 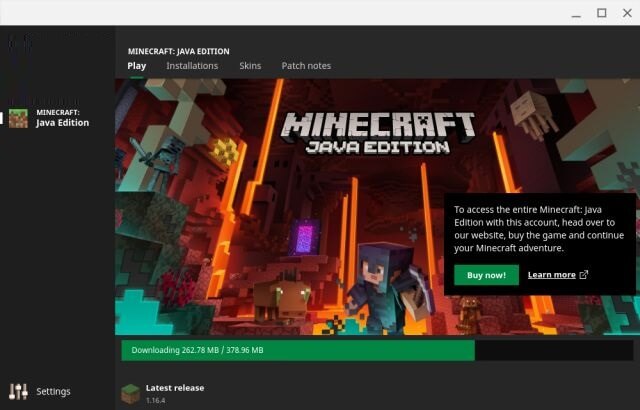 Previously, Mojang’s wildly popular Minecraft was blocked from being used on Chromebooks. Initially. There wasn’t seem to be any reason for the sudden shutdown, but with time everything became clear. Microsoft announced their new educational edition of the game with enterprise features such as offline mode and multiplayer support, which was the reason why the game was discontinued.

However, thanks to Linux support on Chromebooks, and the Chrome OS’s ability to run Android app, it is quite possible to access the Minecraft: Bedrock Editon on the device. If you have purchased the Android version of Minecraft, you can easily play it on your Android.

Next, you need to download the Minecraft Bedrock Launcher on the device. It is third-party software that creates an environment where games can run well without any loss of quality. The Launcher has found a way to run native libraries from the Android version on your computer. Utilizing libc, they are able to fix any incompatibilities between this and other platforms such as Linux so that it can be utilized easily in programs written for those environments.

Follow the steps below to learn how to enable Minecraft: Bedrock on the Chromebook:

1. Install the flatpak repo and the Minecraft Bedrock Launcher.

2. For the flatpak, open the Terminal window, and enter the following command:

3. Press the Y button to continue the installation.

4. Then, you need to install the Flathub repository. This lets the Linux OS know where to find the flatpak from the storefront. It also helps keep everything organized in one place.

5. Now using the Terminal, enter another command, which adds the repository to the device:

6. Once the flatpak is added, you will have to install the Bedrock Launcher. For that, enter the following installation command on Terminal:

7. Select Y to approve the command. The Launcher’s icon will appear on the Chrome Drawer.

Part 3: How to set parental control on a Chromebook?

It is vital to monitor the on-device activities of your child as we are living in a very polarized time. Specific apps or internet content could be harmful to children. Under such circumstances, instead of taking away your child’s Chromebook, you can enable parental control service on the device. It will allow you to keep track of all the activities your child is performing on the device.

To enable parental control on Chromebook, we recommend using Wondershare FamiSafe, which is also compatible with the said devices. You can monitor their social media activities to keep them safe from any kind of cyber-bullying and online predators. You can also check their real-time location with complete accuracy.

Additionally, the tool will provide an Activity Report and the entire Browser History from the child’s phone. Not only that, but you can also apply a web filter to block specific websites for safety purposes. Besides, you can manage content with FamiSafe as it detects explicit content instantly. 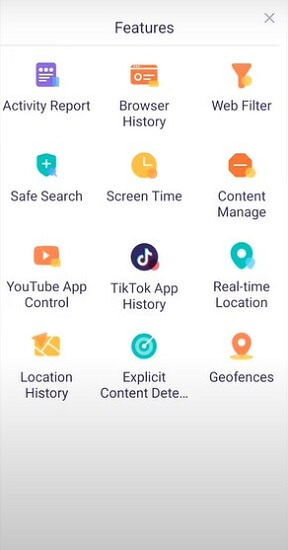 Here is how you can set up the FamiSafe Parental Control app on your child’s Chromebook:

Q1: Is the Java version of Minecraft free?

Yes, the Minecraft Java version is free to play on your Linux Beta.

Suppose you already have a copy of Minecraft, either purchased before October 19th, or know someone who does and would like to gift them with one. In that case, the Bedrock Edition will be available for free download. This updated version has all new features not seen in earlier editions - including cross-platform multiplayer. Otherwise, the Android version is available at $7.49.

Minecraft has become such a universal game that one would want to play it on any device they own. However, for some time, it was impossible to access the game on a Chromebook. Nonetheless, it isn’t the case anymore, as you can enable the Minecraft: Education Edition on a Chromebook with Linux.

Moreover, if you feel that your child is consuming too much time playing Minecraft on their Chromebook, then you can use the FamiSafe Parental Control application to limit their screen time.