What is Five Nights at Freddy's? Parent Guide

It seems to be a common situation that parents are not familiar with most of the games popular among kids nowadays as video games are fast developing. Recently, FNaF(Five Nights at Freddy's) has become one of the hitting games that kids talk about a lot. Escaping theme and the thrilling storyline make the game extremely attractive and exciting. But what is Five Night at Freddy's about? And is it safe for kids? 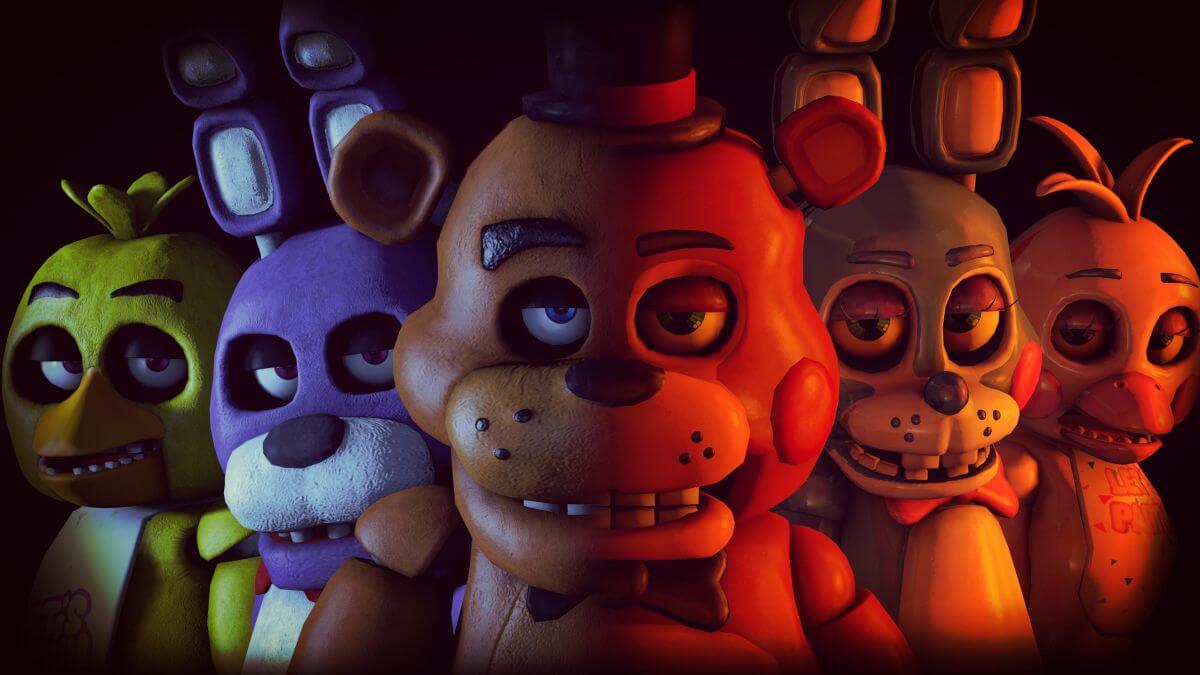 If you are bothered by these questions, you are in the right place. Here you will get all the information you need before allowing your kids to download and enjoy the game. Let's get started.

Five Nights at Freddy's has become a worldwide sensation ever since it was released in 2014. The game is about a closed-down Chucky Cheese-type place with some animatronics. The spooky thing about this video game is that it is based on a child's worst nightmare about haunted animatronics that turns into reality. To this date, FNaf has over 80 million players worldwide, more than fifty percent under 25. 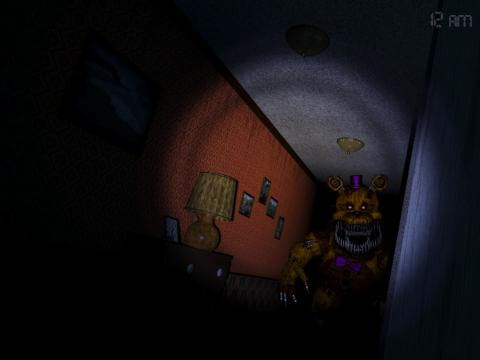 FNaF is themed as a thrilling escape game. It began when two best friends named William and Henry started a kid-friendly business called Freddy Fazbear's Pizza. William mainly is the one that designated the animatronics at their pizzeria.

William purposely designed Circus Baby animatronic to understand how the soul possession works. So, for example, the Circus Baby can read how many people are in the room. And when it senses any child left alone in a room, it will claw that child to death.

In the game itself, you have to survive alone in the pizzeria where the animatronics wander freely. Your only chance to survive is by getting help through a Phone Guy. There are a lot of eerie sounds and scenes in this video game.

FNaF is available on a variety of devices, including:

According to the App Store review, Five Nights at Freddy's is about heart-pounding jump-scaring points. The age rating is 12+, so it's not quite suitable for many preteen players.

"I bought my 7-year-old this iPad game a few years ago. After a few minutes, he was terrified, and I was confused. I saw a strange bear. It must be too scary for elementary kids! I enjoy playing it. Some people overreact, but it's a decent game for older kids." – Johnny Russ rated this game four stars, appropriate for kids age 11 and above.

"It terrified me to the point of shaking. However, it can be a thrilling experience for adults, and I do not understand why this was created for children." – Walford20 rated this game three stars, appropriate for kids age 18 and above.

Is FNaF Safe for Kids? 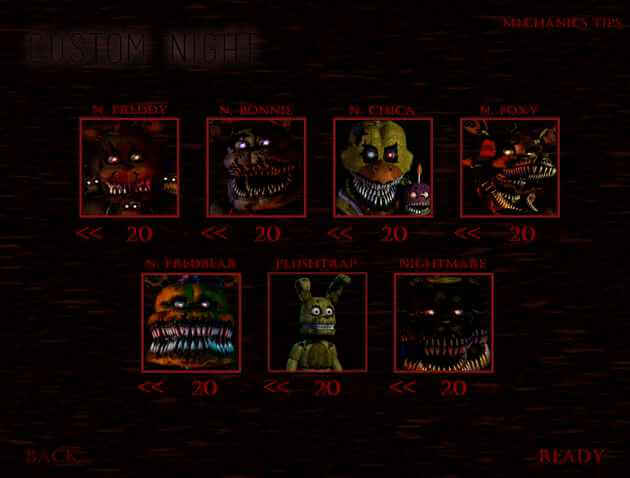 If you have tried this game before, you will find out that FNaF is an exciting game to enjoy in your spare time. However, there are still several issues parents should be aware of before allowing their kids to access it.

Game addiction can be one of the most extensive repercussions of playing video games online. FNaF is an undeniably addictive video game, and it has an exciting storyline where players have to complete a particular stage before proceeding further to complete the video game.

Without proper time management, kids tend to go astray by spending hours on the game.

Despite the absence of any sexual images or content, this game series contains violent and blood material inappropriate for children of a certain age. For example, there are scenes in the FNaF security breach in which one of the characters, Chica, is killed by a machine.

Playing video games poses no risk to the mental health of the child. However, FNaF contains jump scares that kids may be hard to handle. To ensure the game is okay for your kids, parents must thoroughly understand children's tolerance for violent or disturbing images. Some children may be traumatized by the frightening scenes in this video game, while others may be able to shrug it off.

How to Make FNaF Safer for Kids?

Though parents can restrict kids from accessing FNaF, it can be challenging to keep them away from any video game similar to FNaF, and there are even more dangerous games that are inappropriate for kids. Thus, blocking the game can't be the perfect way to solve the problem. Instead, it would be better to develop your kids' good habits of playing the game. Here is what you can do:

To protect your kids from getting addicted to video games, you can set rules on the time they can spend online each day or week with your kids. Then, when their screen time runs out, you can direct your child's attention to other activities that you can play with them outdoor together. For example, go hiking, go for trampoline sprinklers or outdoor camping. For a long time, kids' interest in video games will be mitigated relatively.

Before allowing your kids to download or purchase any game on their device, for example, FNaF, join and try the game with your kids. In this way, parents can tell whether the game is appropriate for their kids or not. And once you find out that there is any potential risk, you can take an instant action to protect them or provide suggestions on how to deal with the situation if they face it in the future. This way can develop kids' recognition. Then, parents can be relieved from the worries over kids on the internet.

Last but not least, you can use a parental control app to monitor kids' online activity remotely, thus protecting them from unexpected dangers. For example, you can control what apps your kids can download and how much time they can spend on the game or the entire device.

The FNaF game has no parental controls, which is unfortunate when trying to control your kids' online safety. We can help, though. 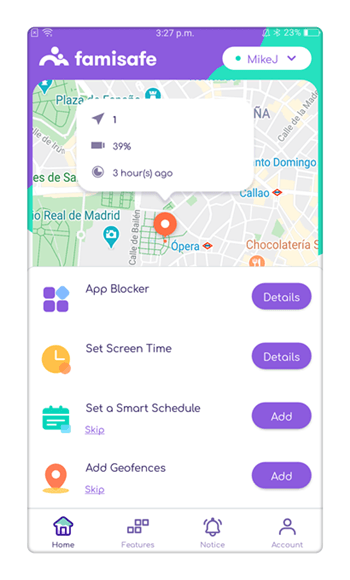 Wondershare FamiSafe is the most reliable parental control app for caring parents. Its features like Screen Time and App Blocker enables parents to set screen time limit to the specific app like FNaF or the entire device. Not only this, but it also allows you to block the app with a straightforward tap. With the Screen Time feature, the app will be blocked automatically once the time is over. If you want to have a try on it, here are the specific steps to monitor your kids' device with FamiSafe:

Step 1: Install FamiSafe from App Store, Google Play, or the official FamiSafe website on your device.

Step 2. After you've downloaded the software, you'll be prompted to create an account. Check to see that you've entered all the necessary data.

Step 5. Grant permissions to FamiSafe following the instruction. Now you are all set to monitor kids’ device.

Step 6. Launch the app on your device, find Screen Time on the navigation bar. Now you can set the screen time for the entire device or one specific app like FNaF.

Here is a video showing you how to set up parental control on kids' devices with Wondershare FamiSafe.

Check which apps kids use most and the apps they install or uninstall.

Block any inappropriate applications, limit the number of time children can spend on their devices, and create intelligent schedules.

It's hard to deny that Five Night at Freddy's is a thrilling horror-themed game for teenagers worldwide. According to App Store, though the age rating is 12+, it would be better to try the game and get to know about it to ensure everything is alright for your young kids before permitting them to access the game.