What is Augmented Reality? A Guide for Parents

Augmented reality is a relatively new technology that has begun to make its way into the mainstream in recent years. It is a type of technology that combines digital elements with the real world, and it can be used in many different ways. This can be done through a phone app or special glasses or goggles. AR is becoming more popular every day and is already being used in many different industries, such as gaming, marketing, education, and healthcare. 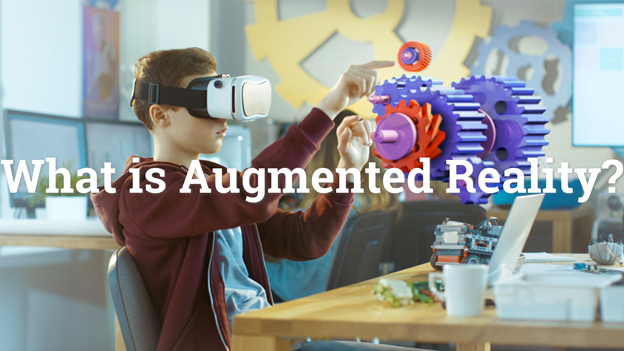 For parents, it is essential to understand what augmented reality is and how it can affect their children. Uncontrolled use of AR apps and games in kids can cause problems like cyberbullying, sexting, and even addiction. However, if used in moderation and with parental supervision, augmented reality can be a fun and educational tool for kids.

This post will discuss what augmented reality is, how it works, and some of the potential dangers that parents need to be aware of.

Part 1: What is Augmented Reality? 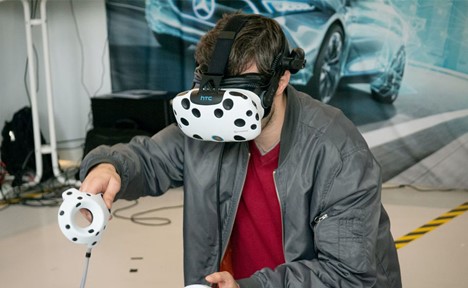 For short, augmented reality, or AR, is a technology that superimposes digital content onto the physical world. It has been used for everything from video games to movies to educational apps. For example, Snapchat, TikTok, and Instagram all have entertaining face filters and engaging games that you may enjoy. But did you know that these social media platforms also employ augmented reality?

In recent years, technology has come a long way and is only getting better. With AR, you can now place digital objects in your real-world environment and interact with them as if they were there. For example, you could use AR to establish a virtual coffee table in your living room and move it around to see how it would look in different locations. You can use AR to view information about products in a store or learn more about historical landmarks when you visit them. You can even use AR to help with cooking or fixing a broken appliance.

AR has the potential to revolutionize the way we learn and work. For example, imagine being able to learn about the human body by looking at a real person and seeing all of the bones, muscles, and organs in place. Or what if you could see how a car engine works by looking at it in augmented reality? The possibilities are truly endless.

Part 2: What's the Difference between Augmented Reality and Virtual Reality? 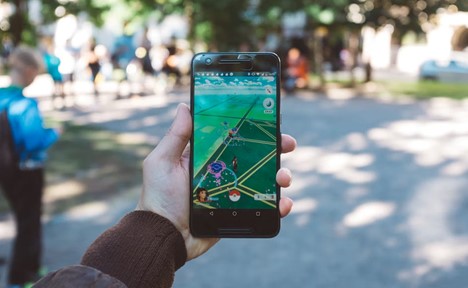 Augmented reality and virtual reality are both types of immersive technology, but they are pretty different. Virtual reality is an entirely digital environment that users can interact with. It is usually done through a special headset that blocks the natural world and replaces it with a digital one. VR is often used for gaming and entertainment purposes. On the other hand, augmented reality overlays digital content in the real world. It is often done through a phone or tablet, but it can also be done with special glasses or goggles. AR is often used for educational or productivity purposes.

You can produce a real-time, three-dimensional model of the world around you by using AR. Instead of overwriting the existing environment, AR lets you view and hear what's going on in the environment as part of your surroundings. Virtual Reality (VR) allows you to visit a digital realm. Everything you see within the confines of virtual reality is computer-generated. What you're looking at doesn't physically exist, but it looks and feels real.

Augmented reality has several positive benefits that parents should be aware of. For one, AR can help children learn in a fun and interactive way. Many educational apps and games use AR, which can be an excellent way for kids to learn new things. AR can also help improve problem-solving skills and creativity. Additionally, AR can be used for things like entertainment and social media.

Education：Some many educational apps and games use augmented reality.

These can be an excellent way to learn about science, history, and math. However, keeping kids interested and attentive in the classroom has always been a challenge. That is an example of what this might look like. Your child can use an AR app on their phone and use its camera to see what a particular bird species looks like when it lands on their desk. This can make it easier for them to determine its size, how it walks, and what it looks like from various angles. 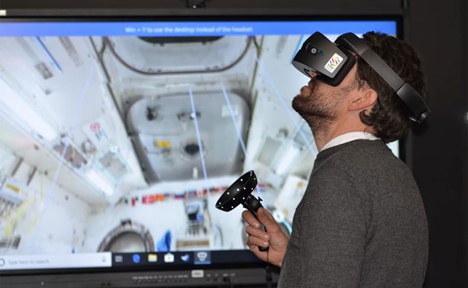 For example, if you are trying to figure out how to put together a piece of furniture, you can use AR to see what it looks like in your home before buying it. Additionally, AR can be used to find things that are lost, such as your keys or wallet. For example, if you misplaced your keys, you could use an AR app to help you find them.

Creativity：AR can also be a great way to boost creativity. 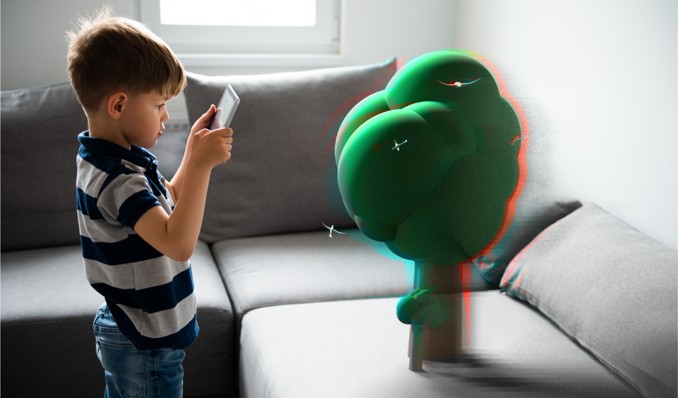 For example, you can use AR to play games or take photos and videos. You can also use AR to create special effects for your photos and videos. Additionally, AR can be used to view movie trailers and TV shows. For example, you can use AR to view a trailer for a new movie that is coming out. Unlike standard video games on the Xbox or PlayStation, Augmented reality games are fully interactive. These games may also give players a more immersed and adaptable experience. For example, games like Pokémon GO! or Jurassic World Alive utilize a player's GPS location to place them in the game. While playing, players can walk around their neighborhoods or other countries and explore their surroundings to find different virtual creatures or objects.

Social media：AR can also be used for social media purposes.

Augmented reality has some potential risks that parents should be aware of. For one, AR can be addictive. Additionally, AR can be used for things like cyberbullying and sexting.

Addiction：Augmented reality can be addictive.

For example, you may become so addicted to AR that you neglect your real-life responsibilities. It's tough enough to keep track of kids' screen time when they want to watch videos on YouTube or talk with friends and family. When children are immersed in an AR game that puts them in the middle of the action in their favorite world, it's pretty tough to pull away.

Distraction in the real world：AR can be used to create virtual worlds that are so realistic that you may forget about the natural world entirely.

Games like Pokémon GO! can be so engaging that you may forget to look up from your phone and pay attention to your surroundings. That can be dangerous, especially if you're walking or driving.

For example, someone could use AR to send mean messages or threats to another person. Additionally, they could use AR to post embarrassing photos or videos of someone without their consent.

Sexting：AR can also be used for sexting.

For example, someone could use AR to send nude photos or videos of themselves or others without their consent. Additionally, they could use an AR app to view sexual images of people they know.

Privacy concerns：Augmented reality games and apps collect a lot of data about users.

This data can include your location, age, gender, and interests. Additionally, the data collected by AR apps can be shared with third-party companies without your consent. This raises serious privacy concerns that parents should be aware of.

Now that you understand the potential risks of augmented reality, here are some tips for parents to help protect their kids:

1. Talk to your kids about AR and explain the potential risks.

Before letting your kids use AR, it's essential to talk about the potential dangers. Explain certain things they should be aware of, such as cyberbullying and sexting. Additionally, explain that AR can be addictive and that they should be careful not to neglect their real-life responsibilities. It's also important to advise your children not to play AR games while walking or driving, which can be dangerous and lead to severe accidents.

2. Make sure the AR apps your kids are using are age-appropriate.

It's essential to make sure that the AR apps your kids are using are age-appropriate. Unfortunately, there are a lot of AR apps out there that are not suitable for children. For instance, Pokémon Go! is a popular AR game inappropriate for young children.

3. Monitor your kid's screen time and limit their use of AR apps.

Just like with any other screen time, it's essential to set limits for how long kids can use AR apps. That will help ensure that they get enough physical activity and social interaction in real life.

It's also important to explain the importance of privacy to your kids. For example, let them know that they shouldn't share personal information with strangers online. Additionally, tell them that they should be careful about what they post online.

There are some augmented reality apps that parents can try with their kids. Here are 5 of them.

Part 7: What Wondershare FamiSafe can do?

Augmented reality can offer kids a lot of fun and excitement, but it's important to make sure they're safe when using it. Wondershare FamiSafe can help parents keep their kids safe while using AR apps. FamiSafe can help you monitor your kid's screen time, limit their use of AR apps, and track their location. Additionally, FamiSafe can also help you block inappropriate websites and content. With Wondershare FamiSafe, you can have peace of mind knowing that your kids are safe when using AR apps.

Some of the features that FamiSafe offers include:

So there you have it—augmented reality has come a long way since its inception, and it shows no signs of slowing down. Kids love using AR apps, but it's crucial to ensure they're safe when using them. They're passionate about AR apps and games because they can be transported to new and wondrous worlds. And as a parent, you want to make sure they're doing it safely. So as a parent, it's important to be aware of the potential risks associated with AR apps and make sure you're taking steps to keep your kids safe.