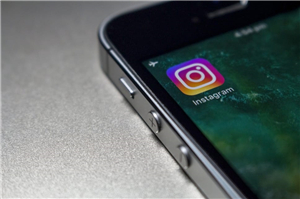 If there was one app that kids and teens with a mobile phone were using, it’s without a doubt Instagram. Millennials spent their youth and college on Facebook, whereas Generation Z is heavily dependent on Instagram. Chances are, your kid might be on the social network as well.

The app that’s supposedly meant for pleasure can quickly turn into pain, as Instagram cyberbullying has become a major problem. With 70% of Instagram’s audience under the age of 19 years (according to Pew Research Center), it’s easy to realize that real-life bullies have found an online home.

According to a survey conducted by Ditch the Label, a nonprofit organization, more than one in five teens between the ages of 12 and 20 years experience bullying and harassment on Instagram.

In the same survey, a 15-year-old named Yael said that she was bullied on Instagram all day long after having a fall out with her friend. The girl posted about her multiple times throughout the day, messaged her repeatedly and also mentioned Yael in her stories. This caused Yael a great deal of stress and anxiety, as every time she went online, she was being harassed and bullied.

7% of the kids and teens from the survey who use Instagram have admitted to being bullied on the platform. This is more than any other social network.

According to an article by Time Magazine, nearly 80% of teens in the USA are on Instagram, and more than half of them have reported being bullied on the platform. That is a staggering number and the harassment goes beyond mean comments. When a student named Cohen came out as gay on Instagram, his inbox was flooded with messages such as “failed abortion” and “faggot”.

What Are Instagram Anti-Cyberbullying New Features and How to Use Them?

Since taking the helm, Adam Mosseri has implemented new features to address Instagram cyberbullying. The old way of reporting an account for cyberbullying still remains. Profiles, photos, videos, and comments can be reported for harassment or bullying by filling the form on the app.

This feature, for the most part, has been a hit and miss. Many people, especially teens, have experienced little action from Instagram despite repeated reports on accounts of bullies.

Instagram has invested heavily in artificial intelligence that identifies content as potentially harassing or bullying. This feature is currently rolling out for comments only. Basically, when someone is about to comment in a language that can be deemed as bullying, Instagram will prompt the user to rethink their words. It’s sort of like a nudge to say that the content might be offensive, so write something else or otherwise run the risk of getting blocked from posting. 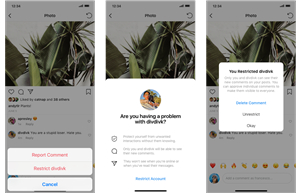 Instagram recently rolled out the Restrict feature which basically allows users to block comments on their posts from users without them (the user) ever finding out about it. While the blocked user will be able to see the comments, they will not be visible to anyone else.

The idea behind this feature, as Adam states, is for users to reflect upon the comment they made. Many cybersecurity experts, however, are not big fans of the idea. As shown in the image, the process to use this feature is fairly easy:

Once you’ve restricted the account, you can also choose to delete the comment or unrestrict the user as you see fit.

The Pros and Cons of Instagram Anti-Cyberbullying New Features

What Can Parents Do to Protect Their Kids From Instagram Cyberbullying

Being a parent in this day and age requires you to be extra vigilant and more proactive than the previous generation of parents. With Instagram cyberbullying being a constant threat that is also evolving, the best thing you can do for your children is to help them understand the risks of bullying.

Awareness about these issues can go a long way in helping your kids deal with bullying online and making sure that it doesn’t lead to any lost time in terms of education and personal growth.

When it comes to being proactive, nothing works like FamiSafe, the most complete parental control app in the market today. Available on both iOS and Android devices, FamiSafe has two versions - the parent version, which gives you total control of how your kids spend their time on their phones, and the child version.

To protect your kids from Instagram Cyberbullying, you can use the app monitoring features to determine how much time your kids are spending on the app. This can allow you to schedule the time you feel is appropriate for them to use the app so as not to build an addiction.

Using the Explicit Content Detection features, you can basically create a list of keywords that you identify with bullies. So anytime these words are used in conversation on the app (comments, direct messages, etc) you will receive an alert on your phone so that you can take the necessary steps to address this problem. The app also filters out suspicious photos from the phone album that gives you the peace of mind that your kids are not being exposed to harmful, violent, sexually suggestive and/or obscene imagery from using the app.

If Instagram is becoming a big problem for your kid, then it’s high time they get off the app. You can use the App Block feature to not only block the app from their phone but also block them from downloading the app again.

If you want to play a more active role in the growth and development of your children, then you must understand the role Instagram plays in their lives. As far as social media apps go, Instagram is the biggest one for Generation Z. The best thing you can do for your children is to make sure their experience on Instagram is not ruined by cyberbullies. Apps like FamiSafe can give you the peace of mind you need to ensure your kids are making the best use of their time online and are having a safe, harassment-free experience.