No doubt, technology has brought us closer in many ways and also helped us to develop. But as the old saying goes that everything has both pros and cons, therefore despite being together, we are too far away. Technology has caused the families to drift apart. Now, the parents are too busy with their work or phones checking to spend some time with their kids. The kids are too busy with social media, games, and other things that they can't talk to their parents even for a few minutes.

It has caused a lot of crimes to happen in our country, and other countries and the child sexual abuse statistics are undoubtedly alarming. The evils like cyberbullying and child sexual abuse can occur due to non- monitored usage of the internet by the kids. Parents should monitor them regularly to safeguard them against these things.

What is Child Sexual Abuse

The stats showing the extent of child abuse are alarming. Various studies and surveys conducted present statistical data that is shocking and can be a cause of worry.

The primary reason for the ignorance of such a severe issue is the lack of awareness among children. Also, it has been observed that 73 percent of the abused children hesitate to tell for at least a year. Whereas 45 percent of the abused hide it for five years, and many never disclose the same.

According to a child sexual abuse statistics submitted by the U.S. Department of Justice, Bureau of Justice Statistics, 2000, sexual assault victims in the age of 12 to 17 years is 2.3 times higher than any other part of the society.

Race, ethnicity, and gender are some of the critical factors in identified sexual abuse. And as per Sedlack, et. Al., 2010, child sexual abuse statistics, the risk of sexual abuse is tripled in the children whose parents are not in the labor force.

What are the signs of possible child sexual abuse?

The children are afraid due to their experience. You might see drastic changes in their behavior. They might always seem scared and quiet. They can also become aggressive and clingy. They are mostly withdrawn and also have difficulty in sleeping.

They may also start wetting their beds and have regular nightmares. They also might be afraid to spend time alone. They can even try to ditch their clothing.

The abuser, in most cases, turns out to be someone that the child trusts. If a child is being abused sexually by someone, they tend to start avoiding the abuser. They are afraid of them and do not want to go near them. A child may also be scared to reveal the identity of the abuser because of many reasons. They can be bribed or threatened, or they may even care for the abuser and might not want to get them into trouble.

The child might pick up an inappropriate language and start using it in public. They also might start taking an interest in sexual activity and actively ask questions about it.

A child might feel exhausted and sleep in the school. They are also unable to focus and might lag in their class. They even start to fail in the school curricular.

These are some signs that a parent should always look out for. These are some red signs which can help you save your child or any other child you know.

Tips for Protecting your Child

Even today, parents do not talk frankly with their children, which is a cause of the fact that children are not aware of it. The parents should talk to their children and tell them about child sexual abuse. They should make their child aware so that he/she can save themselves or any other person in this situation.

Also, parents should make them aware of the good touch and bad touch. There are also awareness programs in schools. Awareness is the first key so that they can protect themselves. Many children do not know what is happening with them till they are way too deep into it.

2. Teach them about private body parts

Parents should talk about the body parts and also make the child aware of the private parts. They should tell the girls and boys that their genital areas are not for everyone to touch. They should also tell them the difference between good and bad touch.

Parents should always try to be more of a friend than parents to their children. They should take an interest in their day to day activity and ask them to share always. It might help your child to talk to you if they are in any problem without fearing you. It is crucial so that they do not get sucked deep into situations like this and are aware of the situation and are able to protect themselves.

Social Media has no doubt helped us in many ways, but it is dangerous too. It can lead to cyberbullying and other crimes. Therefore, the parents should continually check their children's social media history for protecting them against these things.

5. Teach them Self Defence

You can train your child some self-defense moves that might help them when they are stuck in this situation. You can also teach them some ways to avoid these situations like they can run to the crowded area or scream for help.

6. Teach them about Boundaries

You should tell them about how it is inappropriate when someone else touches their private parts, and they should also not touch others' parts. Also, teach them not to contact anyone else even when they are being forced to. It is the way most of the sexual abuse cases start.

7. Teach them about inappropriate photographs

You should tell them not to allow anyone to click a photograph or make a video of them when they are naked. Parents should teach this all to them frankly and also encourage them to talk to you and not be afraid.

These are some ways to protect your child from sexual abuse.

Famisafe can help you to slove this problem 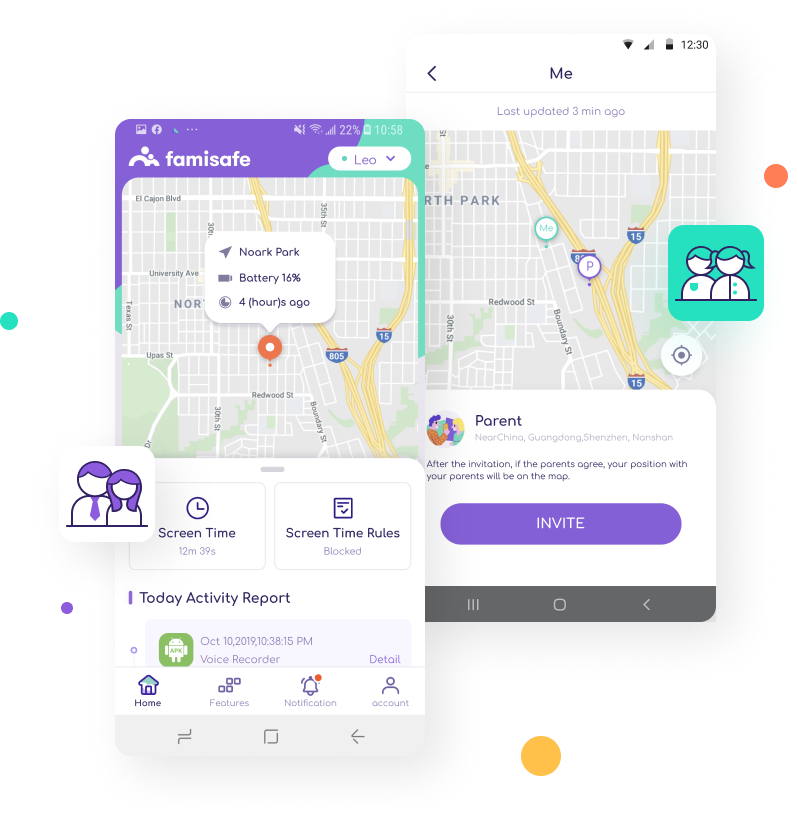 Famisafe is an app that helps parents in a lot of ways. It is a multi-utility app which can help you to track your kids. You can keep a check on your child's location at all times. You can even get a notification every time your child enters or exits a place. You can also get alerts if your child enters a safe or an unsafe zone. This way, you can always protect them.

In addition to location sharing, Famisafe can also help parents keep a close check on their child's YouTube and Google history. Parents can also discreetly block some of the videos and information.

The parents can also keep a check on their child's text messages and other social media activity. This app also alerts them when children are watching inappropriate stuff. This app is one of the best ways to protect your child from many cybercrimes.

There are many cases of child sexual abuse around the world. It is not only the fault of the abuser, but the parents are too at fault. Parents should try and talk to their children more often and take some time out for them. They should keep some time aside and talk frankly about many things; this will make your child trust you with all information. You should encourage your child to speak to you about everything and not be afraid of you. The parents should also keep a check for the signs mentioned above, indicating to child sexual abuse.